This year's theme for LGBTQ+ History month is: Politics in Art- 'The Arc is Long' 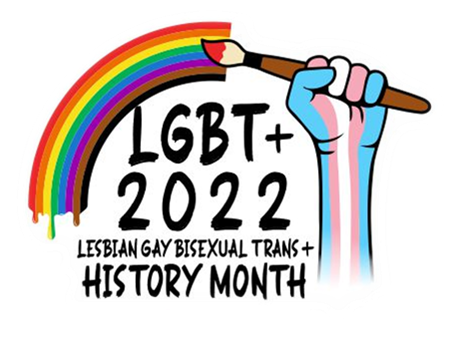 February is a celebratory month here at MDX, to make LGBT+ people visible in all their rich diversity and to educate out prejudice, as we celebrate LGBT+ History Month this year; Politics in Art- The Arc is Long.

At MDX, we pride ourselves in being a community where everyone is accepted and welcome. Our LGBT+ Network is one of a number of equality networks at MDX.

LGBTQ+ History Month focuses on the celebration and recognition of LGBTQ+ (lesbian, gay, bisexual, transgender, queer, plus) people and culture, past and present; increasing the visibility of diverse LGBTQ+ histories, lives and their experiences.

It is a time for celebration - for people who fought for LGBT change and also a reminder that there is still an ongoing battle for LGBT+ equality and inclusion.

Every year 'five faces' are chosen to represent the theme of LGBT+ History Month, in order to highlight the life of a Lesbian woman, Gay man, Bisexual person and Trans person from history whose story we feel is worth hearing again, particularly if it is a story that has been straight-washed from the history books.

Five artists who used their talents for “political” ends, or expressed their orientation through their work area as follows:

Keith Haring‘s dancing figures are a perfect example as they were used to draw attention to the growing AIDS crisis of the early 1980s. Doris Brabham Hatt and Fiore de Henriquez both fought against fascism in the 1930s. Jean-Michel Basquiat began as a graffiti artist and Mark Aguhar‘s life “and mere existence was an act of confronting white hegemony”.

As this year’s anniversary is one on a continuing and often winding journey towards full equality, which has suffered many setbacks while still moving forwards,  ‘the arc is long’ comes from from Dr Martin Luther King Jnr’s quote “The arc of the moral universe is long but it bends towards justice”.

Claiming our past, celebrating our present, creating our future.

Find out more about LGBTQ+ History Month above

Beyond the Rainbow: Your Complete Guide to Pride Flags

Keep reading to learn about all of the pride flags. The variety that exists may surprise you!

The world is more socially and politically polarised than ever. Drawing on her 15 years at LGBT campaigning organisation Stonewall, 5 of which as CEO, Baroness Hunt talks about how finding compromise and common ground is not only possible but for society to survive, vital.