Celebrating the determination and successes of our 2019 graduates

The University held its summer graduation ceremonies from 8-12 July, with 9265 students awarded degrees at 14 ceremonies. At each ceremony, a student delivered an address to their peers reflecting on their University experience and their collective achievement. The University mace, made last year by MDX alumnus Roger Fox partly out of Argentium, a material invented at MDX, was carried in the procession and displayed.

At the end of the ceremonies, students proceeded to the Quad for prosecco and macarons (27,000 of which were eaten during the week), then gathered with their families around the campus for photos including in the newly completed MDX Pavilion, designed by Architectural Technology students. 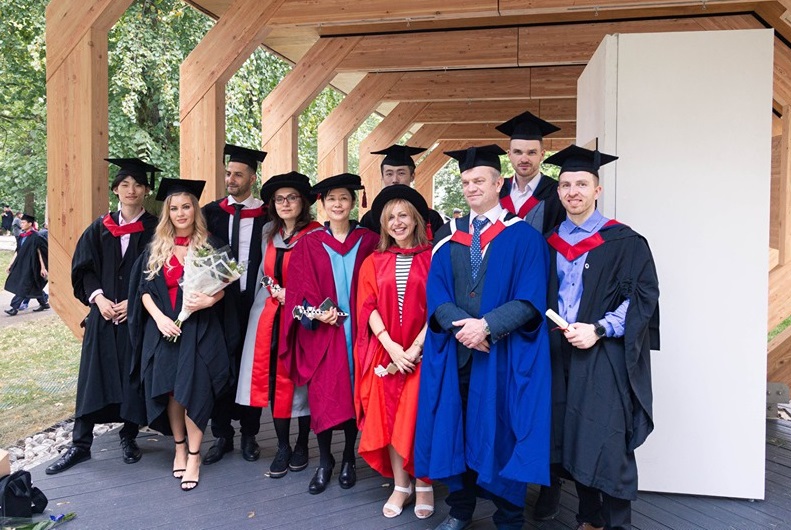 Among students graduating were many individuals who encapsulate MDX’s transformational mission and deep commitment to diversity. Malcolm Bevan from Carmarthen was a lorry and coach driver with his own successful business who had never been to university. His father’s battle with terminal cancer sparked an interest in health and safety, and a desire to study.

Feeling that it was now or never, at the age of 44 he took the plunge to convert a National Examination Board in Occupational Safety and Health (NEBOSH) certificate to a degree with a one year top-up BSc in occupational safety, health and environment building.

At first going back to Wales to visit his father every couple of weeks, by semester two he went in to university on a Monday and drove to Wales on a Wednesday each week to help with his dad's care. His research project was on the impact of obesity on coach and lorry drivers and his father was part of it: he interviewed him and found out a lot about his life that he didn't know before.

Returning to education after such a long break was a struggle. The Learning Enhancement team taught him approaches to essay writing – structure and correct referencing – while Dr Alan Page, Associate Professor of Occupational Health & Safety was invaluable at helping with exam technique. Middlesex was sensitive and adapted to his learning needs when he could only be on campus 2.5 days a week. "Without the network of support I had, I wouldn’t have been able to achieve" he says. 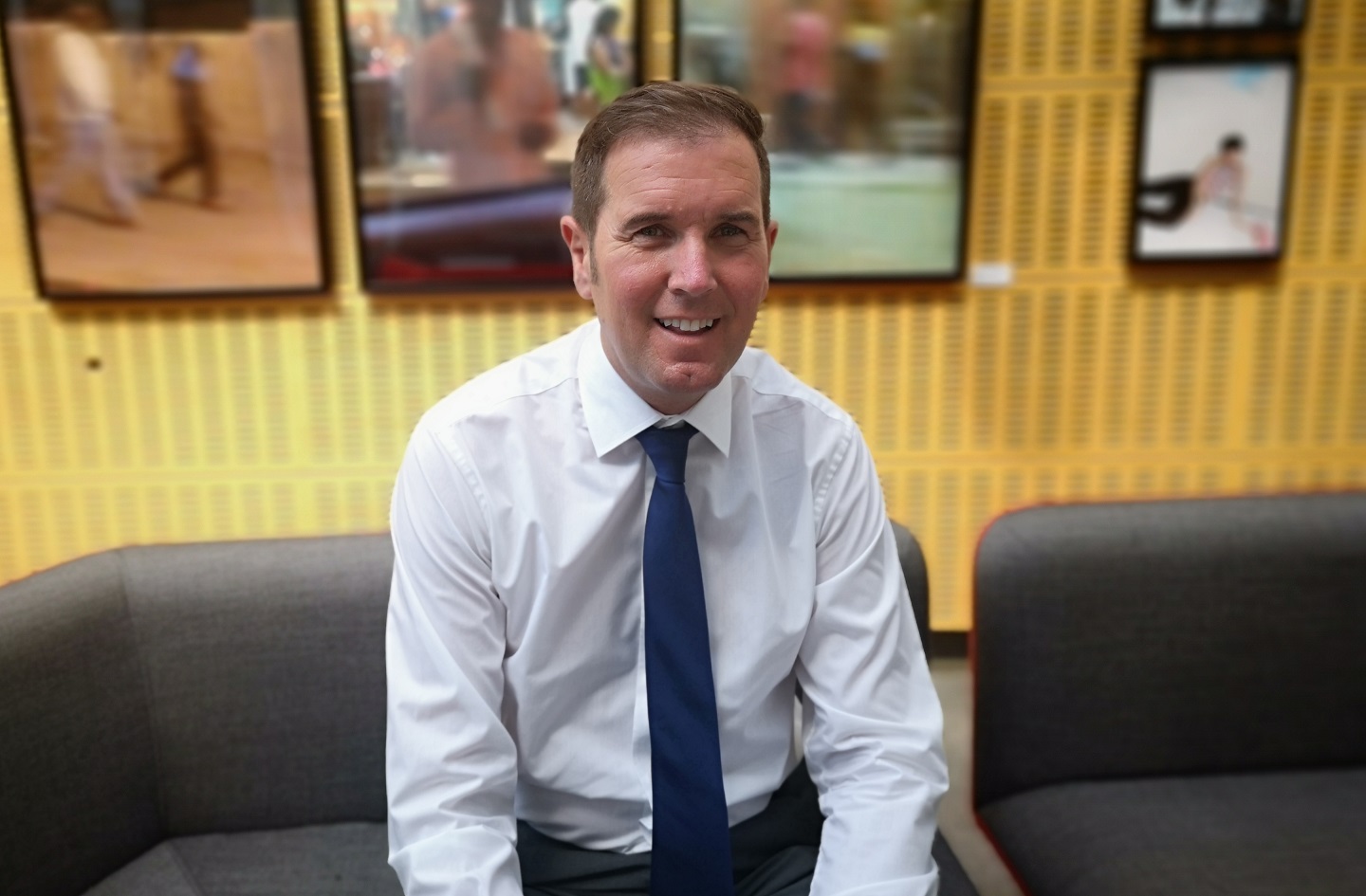 He would have been "over the moon" to have got a 2:2 or 2:1 when he started, but "travelling back and forth, that made me more determined. I think Dr Alan realised I was pushing myself above my expectations at the end" Malcolm says.

“He really has been a very special case. He has supported others on the award and been a huge asset to the cohort” says Alan. Malcolm earned a first class degree, has applied for a Masters in Public Health and is considering a PhD. His father died a month ago; Malcolm would have loved to share the good news of his degree and to have spent Graduation Day with him. Of his newly discovered lust for learning, he says: "We always want to aspire to get to top as soon as possible. I’m the tortoise, someone else can be the hare". 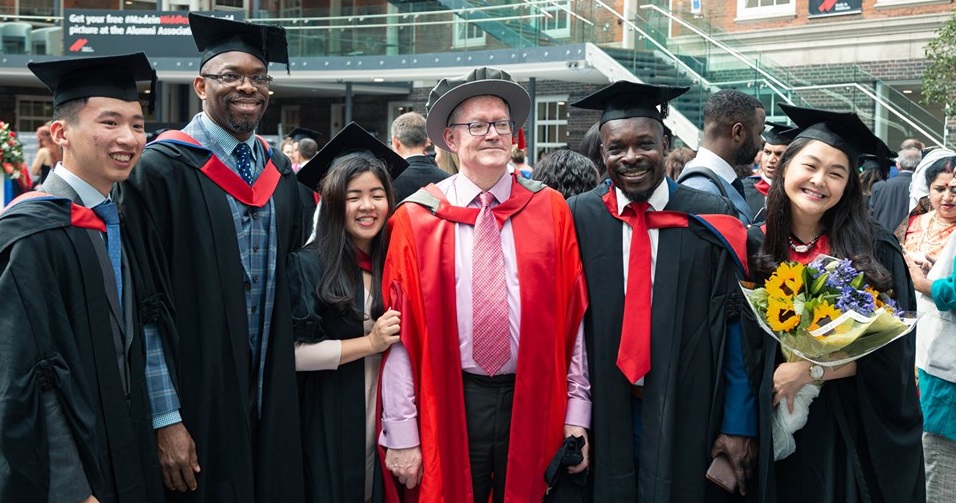 Saral Hassan has just graduated with a First Class Honours in Business Management and Marketing, after spending the last three years meeting deadlines, doing exams and looking after two children.

Before starting at Middlesex, Saral did an access course and before that she was studying English as Kurdish is her first language. She was working in charity shops and helping family businesses but is now looking forward to starting a career in banking once she completes her Masters, which she will also do at Middlesex. 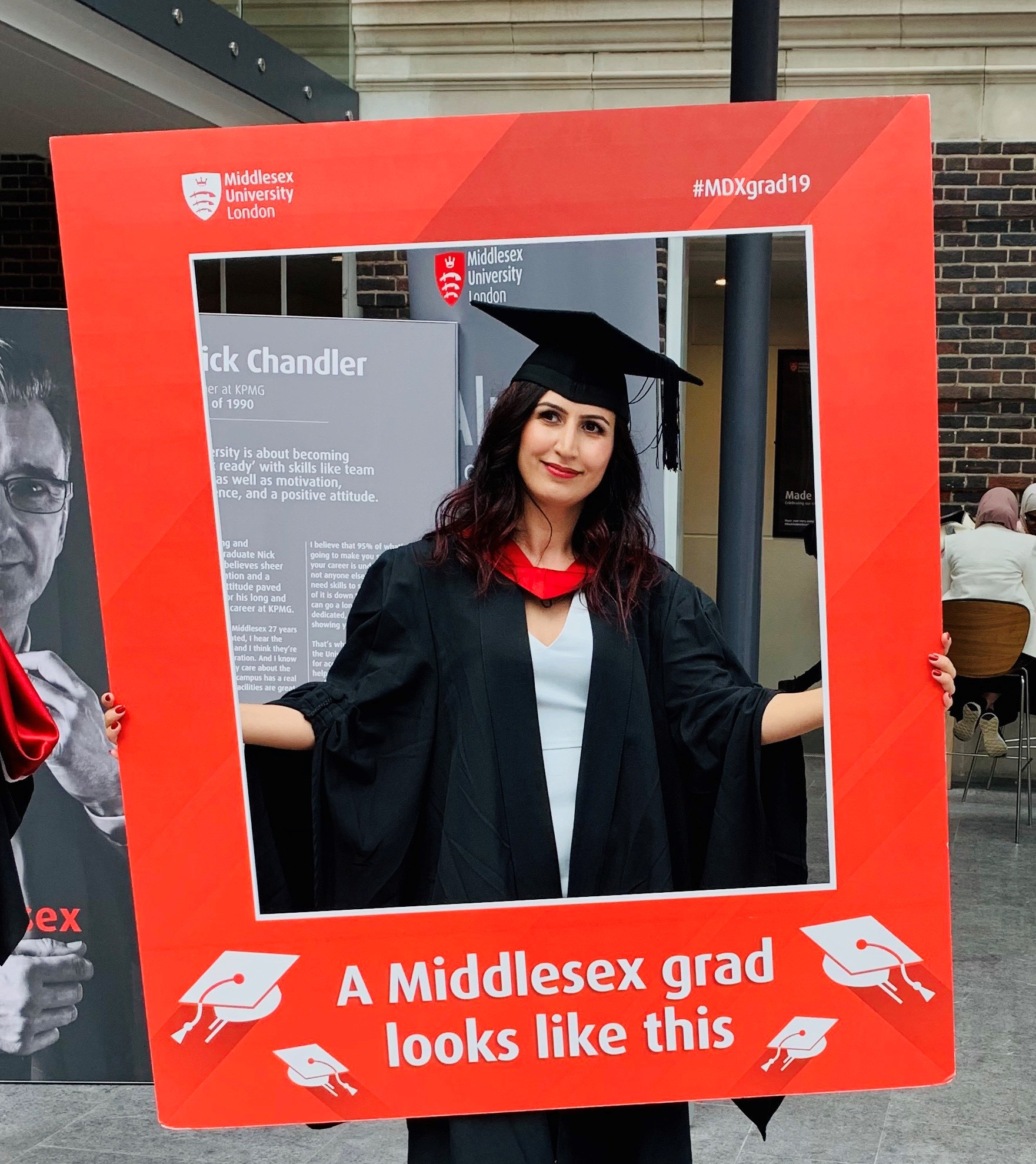 Among the reasons she chose MDX was because of its reputation in Business, and because of the flexibility it offered to students who were also parents. “The timetable and support of lecturers enabled me to do this degree. If seminars clashed with looking after my kids my tutors changed them and worked around me. They really helped me” Saral said.

Her husband’s support and her organisational skills were key factors in balancing home and student life. “I was very focussed. Once I put the kids to bed I went back to my laptop and assignments.”

“Despite difficulties in English, and the stresses of being a full time mother and student, she has performed exceptionally well and is working towards trying to start a Masters degree this  year” says Graduate Academic Assistant in Marketing Dina Haweel of Saral’s achievement.

Reflecting on her experience at Middlesex she said: “I’m more confident now.  When I look back I wasn’t this person.  I was so shy and quiet. Now I’m more open and can take on any situation.”

Some students secured a foothold in their industry long before they graduated. BA TV Production graduate Klaudia Slowik landed a full time job in March as a Logger for Shine TV, which involves reviewing all recorded content and helping shape the footage that make it into the final edit. 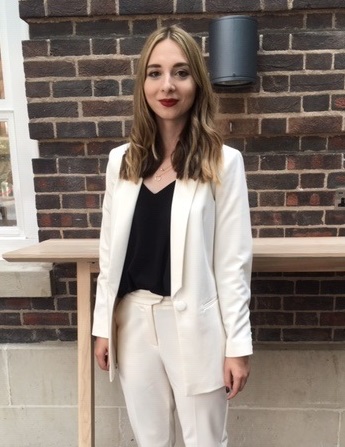 She decided Middlesex was the place she wanted to study when she was bowled over by the TV production facilities, and she has received “amazing” support from her lecturers – “all industry professionals and so, so approachable and knowledgeable. I have learned everything I need to know here, in a fun and really interesting way”.

The highlight of her course, Klaudia says, was a two hour guest lecture by an editor of the controversial Michael Jackson documentary Leaving Neverland: “Just mind-blowing. It taught us about how to deal withsensitive subject matters, and how to edit feature length documentaries”.

“I am so excited to be starting my career. It is exactly the industry I want to be in forever,” she says.

The very first cohort of students graduated from MDX’s innovative BA English course. The programme is distinctive for offering all three disciplines of English Language, English Literature and Creative Writing, and some modules where students study all three together. While the classics are covered there’s an emphasis on highly contemporary material: the second year Literature course, for example, focuses on works published in just the last 18 months, so students can’t rely on secondary literature. 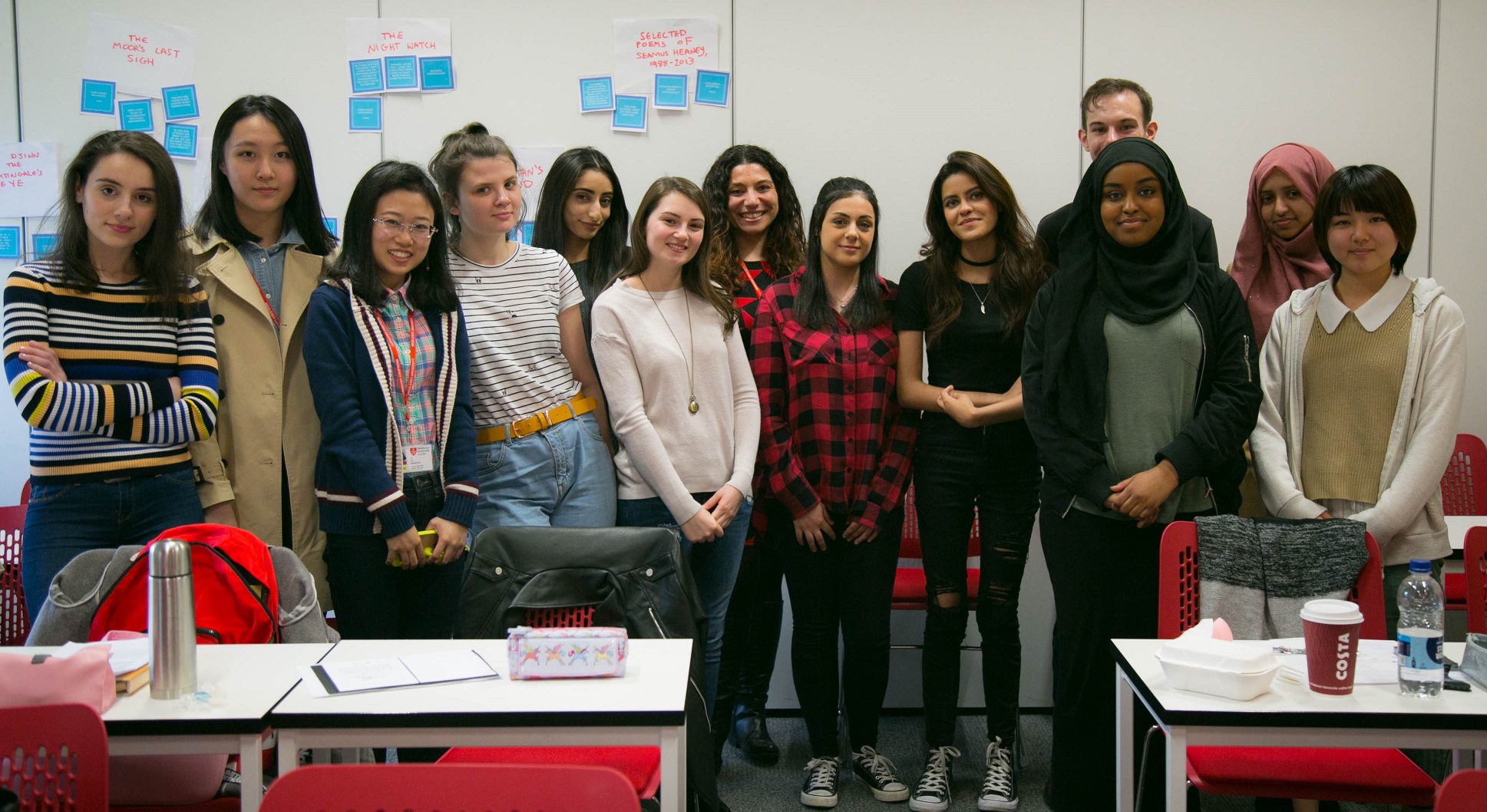 There are opportunities to get involved in co-curricular and extra-curricular activities, which have included biweekly language community and research seminars and a project mentoring sixth students producing a magazine.

Azize Peraj, the first member of her family to graduate from university, enjoyed the opportunity to apply linguistic theory and critical discourse to her chosen subjects of veganism and Instagram in the Language part of her course, the one-to-one tutorials that the programme offers, and the skills development and work opportunities available through the MDXWorks Employment Hub. The diversity of her coursemates, from many different backgrounds and from London and beyond also appealed to her.

Her tutors were highly attentive to students’ needs, "how they develop as people as well as academically" Azize says. Senior Lecturer Dr Anna Charalambou in particular was "fantastic in terms of lining up students with different networking experiences".

Azize landed an internship that gave her the opportunity to meet and work alongside high profile politicians. She loves public speaking and having done some presenting while a student, she hopes to pursue a career in this field.