#TeamMDX stand up to Violent Crime

MDX students, graduates and academics come together to produce powerful films to tackle violent crime in the city

The work began following a project earlier this year by Senior Lecturer in Film, Helen Bendon, and her MA Film students to produce a film about reporting hate crime. This project, in collaboration with the Metropolitan Police, was a success and led to Helen and Osbert Parker, Senior Lecturer in Animation, being approached by the Violent Crime Prevention Board.

Students, staff and graduates have all worked together to produce the films, which were then presented at the launch of the Violent Crime Prevention campaign this month.

Later in the evening, BA Film students presented a five-minute film, weaving together stories about the moments when a decision to carry a knife or commit a violent crime can change people’s lives, forever. Their film played to introduce Amani Simpson a survivor of knife crime and filmmaker - a powerful and moving moment.

Anna Riva, who is just beginning her third year on BA Film was a production assistant and colourist on the film:

“It was a great opportunity to work on an inspiring team project and gain professional experience, it allowed me to contribute to project enhancing the strong message of this short film." 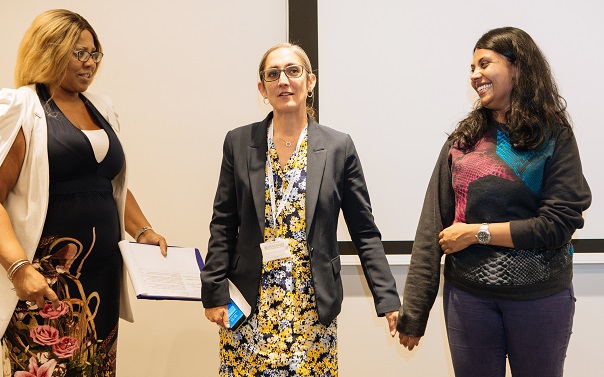 Helen Bendon (pictured above: centre), notes this production has set a real buzz among the cohort at the start of the academic year:

“For us, not only has this been a great opportunity to be part of a very important conversation – we have also enabled out students the opportunity to use their skills and expertise to make an impact, and to gain the experience of working for a real client with clear objectives."

Congratulations to all the students, graduates and staff who have been involved in this incredible project. #TeamMDX