Fine Art student Gabriel Dearnaley hauled boat mooring posts weighing over 100kg from the River Thames up to Middlesex University’s Hendon campus to exhibit as part of his final year project which examined the regeneration of the London riverside area and the repurposing of structures. 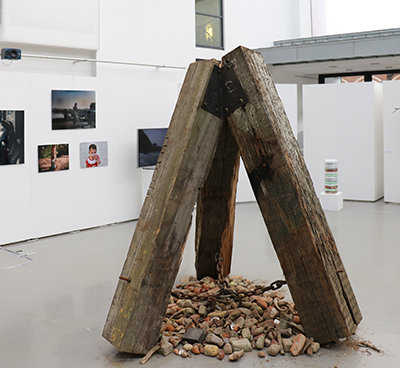 Speaking about the experience, Gabriel, who is from Cambridge said: “My time at Middlesex has been good and very challenging, culminating in an ambitious artwork involving chainsaws, moving vans, engine hoists, welding and hauling over 100kg of material to Hendon from the riverbanks of the Tate.

“I had started my third year interested in Utopian architecture and structures built on a monumental scale that had become obsolete, but were also too large and revered to be knocked down.

“Buildings such as Victorian train stations, coal-fuelled power stations and enormous shipping warehouses all glorified ideals which were thought to bring a better future to their surrounding populations at the time of their construction.

“There are a great many structures along the banks of London's Thames, all of which have been subject to the rapid societal changes of the past 200 years.

“In the power stations of Battersea, Bankside one can also see how these enormous buildings become repurposed to serve contemporary needs: Bankside has been adapted from a cathedral to power into a cathedral of culture.

“Battersea, on the other hand, reflects London's shift towards higher-end housing and cultural hubs of shopping, green spaces and glass - its redevelopment centres on it being a focal point of a larger project.

“In both cases the monuments become something radically different to what they were originally, but also preserve elements of that history to form a rose-tinted narrative for public memory.

“My own sculpture aimed to take this approach with mooring posts from the Thames, repurposing objects originally for a more naval London into an impactful public sculpture that still evoked elements of its history, such as the carcasses of animals and boats that wash ashore with the tide.

“This paired with a two-channel video piece with interviews and vignettes musing on the two power stations' pasts and futures.”

The MA Fine Art course which Gabriel took at Middlesex offers artists time and resources to explore and evolve their artistic practice within a flexible research-led course featuring some of the best art facilities in London and expert guidance from a range of leading artists, academics and curators attached to the course.