Eastbourne performer, James Cross, who is currently studying for his Masters at Middlesex University, is preparing to take his physical theatre spectacular, Scenes from an Urban Gothic, to the Edinburgh Festival Fringe with performances between 5-28 August 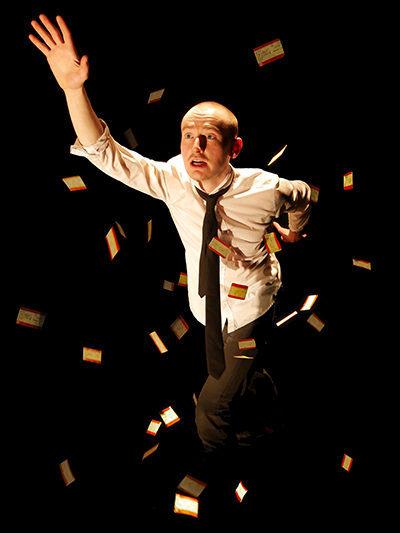 Scenes from an Urban Gothic is an imaginative, physical show depicting one man’s struggle against a dark and surreal metropolis. Performances will be hosted by Middlesex University’s Theatre Arts Exchange pop-up venue at Gayfield Square in the Scottish capital and tickets are now on sale.

Speaking about the opportunity, James Cross said: “I'll be performing for the entire month at Theatre Arts Exchange with my company, Theatre Imaginers physical, solo performance Scenes from an Urban Gothic.

“I chose to study at Middlesex as I also studied on the BA Theatre Arts course. Knowing the course and the tutors who would be guiding me, I knew it would be a great opportunity to develop my work in a supportive environment.

“My work has developed greatly since the beginning of the year. The Masters has given me time to process thoughts and ideas, pushing me to take risks, explore and experiment in an exciting, ambitious atmosphere.

“Fingers crossed Scenes from an Urban Gothic goes down really well, we're able to build up a reputation as an exciting, emerging physical performance company and are able to take our show to as many audiences as possible!”

Middlesex University’s Theatre Arts Exchange boasts a programme of carefully selected, ambitious performances by emerging and established companies from all over the country. Many of the professional shows feature Middlesex staff and graduates as well as a line-up of free performances from current Masters students.

The venue will be staffed by Middlesex University Theatre Arts students who will gain invaluable experience working at a new Fringe venue, putting their comprehensive training to use at what has become the biggest arts festival in the world. Tickets for performances are now available at the Theatre Arts Exchange website.

You can find out more about Theatres Imaginers Physical at: theatreimaginers.com and on Twitter: @ThImaginers