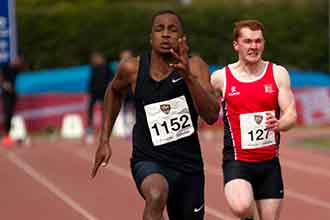 Middlesex University student CJ Ujah set off on the road to Rio by claiming the British Universities & Colleges Sport (BUCS) 100m title in Bedford over the weekend, setting a championship record in the process.

The record breaking run can be watched online.

“I’d have liked to go a bit faster in the final but I didn’t have the start. But I take from this the positives. I felt smooth and upright, so I’ll keep working on it.”

“I think BUCS outdoors came to life after CJ ran the heat in the way he did.

“His power and technique were incredible; he seemed to get further and further away from the rest of the field with ease. It really does put into perspective how fast he is running when you think about the distance he won some of the races in.”