Register to vote in the upcoming EU referendum

Ahead of the referendum on 23 June

You will have recently received a joint email from Professor Tim Blackman and Aman Siddiqi highlighting the importance of registering to vote – especially ahead of the EU Referendum on 23 June.

Need more info on what it’s all about? We’ll run you through the basics…

What is a referendum? It’s a national vote which takes place on issue and the UK gives its eligible citizens the chance to vote ‘Yes’ or ‘No’ answer to a question of national importance.

How do I register? Visit gov.uk/register-to-vote

What documents do I need to register? You’ll need your National Insurance number to register to vote. Look for it on payslips or official letters about tax, pensions or benefits. You can also ask for a reminder through the post.

Can I vote in the EU Referendum? You can vote in this referendum if you are registered to vote in the UK, are 18 or over on 23 June 2016 and are: 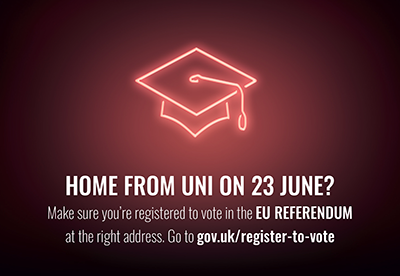 Where will you be living during the summer? If you’ll be back at home on 23 June, make sure you’re registered at that address to vote in the EU Referendum.

When is the deadline? The deadline to register is Tuesday 7 June. If you are already registered to vote you will receive a poll card by Wednesday 25 May.

You can find out more about whether you’re eligible to vote and to register on aboutmyvote.co.uk