The former Middlesex Student is competing against 5 other new comedic talents for the honour of this prestigious prize which has been won by notable UK comedians including Lee Mack, Sarah Millican and Russell Howard. 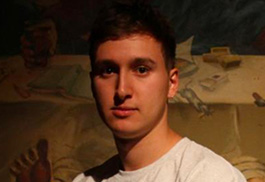 The final, which airs on Sunday 13 August at 6.45 pm on BBC Radio 4, is live from the world renowned Edinburgh Fringe Festive, an event featuring live comedy, theatre and alternative performances.

The winner will take home £1,000 and a 15 minute script commission from BBC Studios. All finalists will be mentored by the BBC Studios comedy team across the year and receive advice, guidance and the chance to write for and appear in slots across the BBC.

Born in Stevenage, Jacob grew up in Bedfordshire, before heading off to the Greek resort of Faliraki where he spent his evenings performing Kings of Leon songs to holidaymakers.

On his return, Jacob moved to Kennington in London and studied for a degree in theatre arts at Middlesex University, where he now works.

He said: ‘Paul Sinha really inspires me. When I was 19 I worked the bar at a comedy club. I hadn't started performing comedy but I knew I wanted to be a comedian. I'd watch him every night and he was amazing. It was usually quite a rowdy night but he had an amazing knack of controlling the room and also being introspective, vulnerable and interesting. I would always be inspired to go home and write.’